On arrival at Paro Airport, you will be received by our executive, who will be waiting outside for receiving you and proceeding towards hotel to check in,fresh n up and we will start with a local sightseeing .Evening scroll in market & Night Stay.

After having done with your breakfast we will start our day with doing beautiful sightseeing of Paro.
‘’ Trip to Bhutan is never complete without climbing to Taktsang ‘’ says one Tourist,indeed its true as a journey there feel you with spritiual blis. 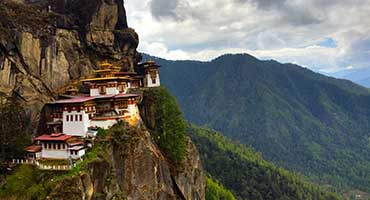 Taktshang Monastery: (Tiger Nest) is located at top of about 800 meter cliff in Paro. It takes slightly more than an hour and a half to reach the monastery on foot from the nearest road point. Taktshang or the Tigers lair as the monastery is widely regarded is one of the most important in Bhutan. Its history is associated with the visit of Guru Padmasambhava, the Indian saint who came to Bhutan in the 8th century AD. The cave was named Taktshang after Guru Rinpoche flew into the cave from Kurtoe Singye Dzong in eastern Bhutan riding on a tigress. Later in 1692 the fourth Druk Desi Tenzin Rabgye started to construct monastery and finally completed after three years in 1694.

Dzongdrakha Gomba: Dzongdrakha Gomba is actually a temple complex with four shrines , Drolma (Tara) Rimpoche ,Tsheringma (goddess of Longevity) and maitriya (the Buddha of the Furure).It is located at the cliff where is the western side of the Paro Valley.This place is also known by the name ‘Mini Taktsang’ ,to reach this temple complex you have to drive 20minutes from the main city of paro.The temple is actually on the cliff above the Bondey village. While working through the road towards Dzongdrakha you can see beautiful shrubs of Rhododendro and oak tree monkey sitting on it.

Chencho Handicraft :The handicraft emporium is located to the heart of Paro city.In the corner of the town square and can easily be reach by walking.The shop is also known as the Traditional Weaving House.You can also use public transport to reach there.

Archery Ground :After a visit Paro weekend market or Druk Choding Temple,its well worth wondering town to this local archery ground to see if there is traditional archery game on.

Nyamai Zam:Beside Paro Dzong ,this traditional wooden covered bridge is a reconstruction of an older bridge,Which was washed away in a flood in 1969.Earlier version of this bridge were removed in the time of war to protect the Dzong.The most picturesque picture of the Paro Dzong is taken from the west bank of the river.Just downstream from the river.

Thimphu – The capital of tiny kingdom of Bhutan is 2 hrs drive (65kms) from Paro City.It is one among the two capital city in Asia without Traffic Light.The other is Pyongyang in North Korea.
After having done with your breakfast , we will move towards Thimphu and we will visit the local sightseeing and night stay. 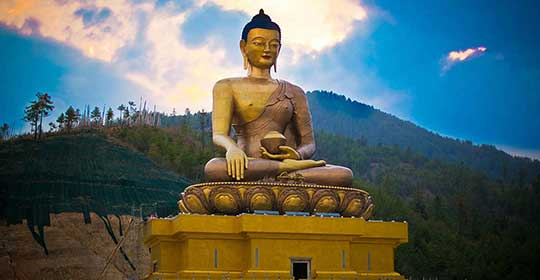 After done with your breakfast , we will start our day with local sightseeing & evening scroll in market and night stay.

Changangkha Lhakhang:Situated on a small hill overlooking the Thimphu valley the monastery was built in the 13th century by Lam Phajo Dugom Zhigpo. Children born in Thimphu are taken to this temple because it is considered the spiritual home of the children born in Chang valley.Names such as Tandin Sonam are given from this temple to new born babies taken for blessings from the protector deity Tamdrin.The central statue in the temple is Avaloketesvara, Buddha of compassion, in his manifestation with 11 heads, a thousand hands and eyes; it is built with bronze and plated with gold.

Sangayang View point (Telecom Tower):Theirs is a wonderful view of thimphu valley from the hillside below the telecommunication tower ,elevation (2685m) high above the tower at the end of the road that branches off from the approach to the youth centre.The complex also houses the board casting studio of Bhutan television. Don’t photograph the telecommunication installation ,but the valley is worth a few snaps .The valley is known as Sangayang and its become the lover’s lane late at night.

Bhutan Postal Museum :The Museum’s main objective is to tell the story about Bhutan development and progress in the 21st century especially in the communications and the postal system of the country .It is the heaven for stamps collectors.the Postal Museum comprises of 5 galleries.It is the worth a visit if you are around in town.there is also a café just in entrance.

After done with your breakfast, we will proceed towards to drop you to Paro Airport . Our representative will help you with your exit formalities and the bid you see off. Like all good things, your Bhutan tours will come to an end. We will be happy to see you back. Do visit us because Bhutan has more to offer to you.